Getting Started with Video Primer

Here's a great little primer on getting started with video use with the Canon 5D Mark II by Andrew Tucciarone. You can find it from our friends at Black Star here.
Posted by Charlie Mahoney at 5:13 PM No comments:

This looks very promising and very interesting. Now, the $10,000 question is: Will places like Wired Magazines be able to monitize it's use and thus pay fairly for this content? Let's hope so.
Posted by Charlie Mahoney at 5:33 PM 1 comment:

Are We Part of the Problem??? (continued) 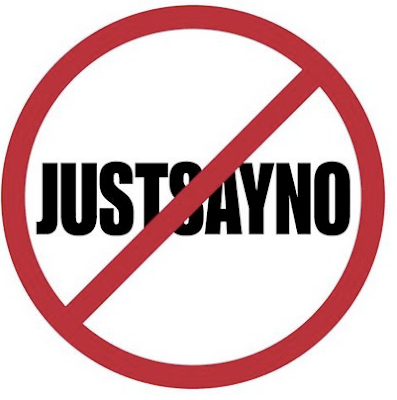 I came across Allan Mutter's blog recently, called Reflections of a Newsasaur, which is definitely worth adding to your RSS feeder. In my last posting, I brought up the question of whether we (photojournalists) are part of the problem. Although Mutter's blog is more directed towards journalists, I think he would argue that we are a part of the problem, mainly because sometimes we just aren't capable of saying "No"!

If you read this link, just exchange journalist with photojournalist and it pretty much applies perfectly to our struggling profession. Here's the link here. I've attached part of the text below:

Stop the exploitation of journalists

It’s time for journalists to stop participating in their own exploitation by working for a pittance – or, worse, giving away their valuable services for free.

Apart from the sheer righteousness of being paid an honest dollar for an honest day’s work, journalists need to stand together – and stand tall – to reassert the stature of their profession.

The reason is simple: If they don’t put a value on what they do, then no one else will, either.

Last time I checked, the prevailing way to express value in our modern economy is via the transfer of m-o-n-e-y. In a minute, I will share a simple spreadsheet to help you calculate your own worth as a journalist.

But first, I am urging everyone to join in my new year’s resolution to just say no to people who invite you to work for nothing or something awfully close to it.

continue...
Posted by Charlie Mahoney at 12:00 PM No comments: 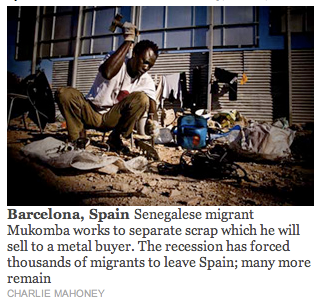 You can find the full article in the online version of TIme Magazine here.
Posted by Charlie Mahoney at 11:14 AM No comments:

The Blame Game: Are We the Problem? 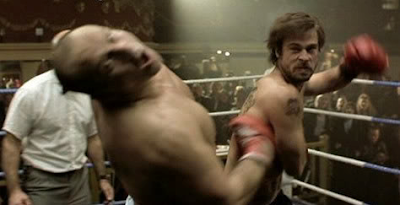 Over the last few months I've noticed a markedly sharp uptick in open frustration by photojournalists on the photojournalism posting board, Lightstalkers. The commentary has lowered to the level of exchanging insults and threats. This is a real blight on our industry. If you haven't seen them yet, examples can be found here and here and I'm sure there are others. We're all feeling the pressure of the perfect storm that is affecting photojournalism today, and many photographers, including long established leaders in the industry seem to have reached their breaking point.

All this pent up frustration has lead to a round of accusations and many of us are looking to finger the blame, but what about our own responsibility in this economic mess? Aren't we a part of the problem as well. If so, let's look for some solutions already!

I will continue to address this issue as I can in the coming weeks, so if you have any ideas or comments, I invite you to share them here.
Posted by Charlie Mahoney at 9:41 AM No comments: 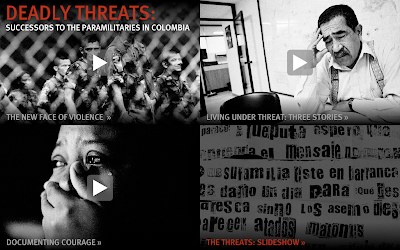 Human Rights Watch has collaborated with photojournalist Stephen Ferry with this very well done and short (and that's a good thing!) multimedia piece on Colombia. You can see it here.
Posted by Charlie Mahoney at 1:34 PM No comments: 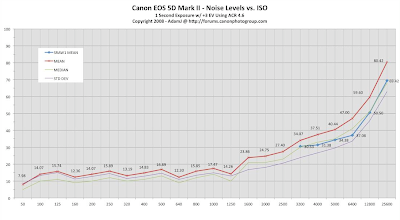 Grazia Axel!
Posted by Charlie Mahoney at 11:21 AM 5 comments:

LENS: On Assignment with Michael Kamber 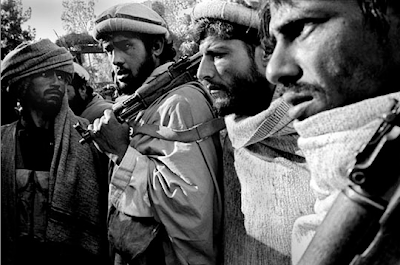 The New York Times blog Lens has a nice piece on some of the realities of working with fixers in "difficult" places where language, logistics and mining the field of burocracy to gain access to your subject matter. Fixers can be expensive and they can dig deep holes in the financing of a project. The best advice I can give to any one who uses a fixer is select them well, because there is a huge range of quality out there and some can become more of a liability than a help. In any event, the Lens piece is a good read and shares some insight on Michael Kamber's (photojournalist, writer and videographer) experience in Yemen.

It’s New Year’s Eve in Dakar when the call comes from the editor in New York. A Nigerian man, Umar Farouk Abdulmutallab, tried to blow up an airliner headed to Detroit six days earlier. I’m told he’d studied in Yemen. Steven Erlanger, chief of The Times’s Paris bureau, is already there filing stories. I’m to join him immediately. I fly to Paris, pick up money and gear at the bureau, then rush back to the airport to catch a flight to Dubai. Thirty-six hours after leaving Senegal, I’m in Yemen.

Its capital, Sana, is easily the most charming city I’ve seen in the Middle East. After Dubai’s garish chintz, Baghdad’s cinderblock boxes and the boring modernity of Amman, Sana astonishes — with narrow winding streets and rows of ancient mud brick buildings decorated with stained-glass windows.

I set out with Steve to photograph the trail of the bomber, who had frequented a local language school and two or three mosques. There is not much to work with. I’m simultaneously shooting video, which adds to the complexity of the situation. To make matters worse, the government assigns a minder who stays with me every minute of the day. A short, jowly man with a huge mustache, his job is ostensibly to facilitate my work. In practice, he follows me around chewing khat, a leafy narcotic, and occasionally expounding on the works of Hemingway, which he has read in Arabic.

At the school, the students don’t want to be photographed for fear their parents will see them. One mosque allows us inside for a few minutes, but we’re quickly ushered out as prayers begin — just when it gets visually interesting. I work around the edges, trying to find interesting visuals: moments, shapes, contrasts.

To continue, click here.
Posted by Charlie Mahoney at 8:30 AM No comments: 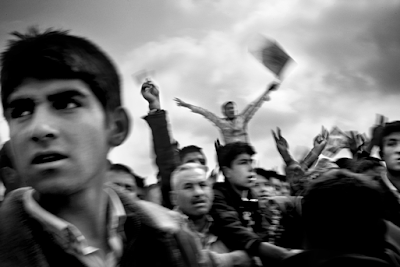 There is a wonderful Q&A interview with Kathryn Cook from the NPPA blog The Visual Student.

VS: Describe your current work situation and how you got there.

Cook: “I have been a freelance photographer for nearly 5 years and am now represented by Agence Vu’ (France) and Prospekt (Italy). I try to focus on long-term stories which I which I balance with assignments.

How it all began - I studied journalism at the University of Colorado at Boulder and found photography through 2 elective courses. After a few internships, and a fellowship at the Poynter Institute, I started interning/freelancing at the Miami Herald when Maggie Steber was the DOP. She gave me a chance to continue working there, which I did until I decided to move to Guatemala in 2003 to take some Spanish classes. From there I was hired by the Associated Press to take the post in Panama. I stayed there for almost 2 years and then left my job to pursue a freelance career.”

VS: How important is balancing work and personal life?

Cook: “When I first started my career in Panama I wasn’t interested in balancing a personal life with work because I was too excited to think about it. I was quite ambitious and determined, so I just wanted to focus on work and not much else. But that changed after a couple years. I think I realized that I had nothing to balance my emotions and my energy. I’m inspired by the people in my life, my family, my friends, and my boyfriend… and now my 5-month-old baby. If I don’t have them, I don’t nurture the range of emotions that are normal and natural and it is harder for me to refer to them when I am connecting to people I photograph. So for me, my personal life creates me and molds me as a human being, and then I can carry that into my work.”