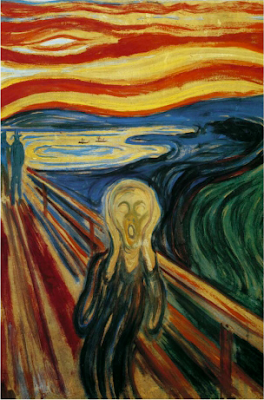 The Scream by Edvard Munch

Yesterday, I was working on an assignment on a travel related piece in Girona, which is a beautiful city about an hour north of Barcelona. As part of the assignment I had to shoot a bakery and a restaurant. Since these types of stories can bring positive publicity for a business, there are rarely any problems and usually if you explain to the customers as well, they don't mind being in the photo either. That being said, I'm always surprised by the people who get hostile about having their picture taken, especially in this type of situation. I mean I can understand it if you are doing something illegal or cheating on your wife, but buying bread? What would someone fear, exactly?

While shooting in the bakery, an older man started to protest as I took photos of the two women selling bread. He was to my side with his back to me and was out of the frame. I told him that he wasn't in the photo and if he were, it would only have been of his back side. I could have gone on to explain that since I was focusing on the two women, he was extremely dark, out of focus and completely unrecognizable, but then again, how do you explain that to someone who doesn't understand the technicalities of photography. And if you're busy and need to work quickly, do you really want to waste your time and energy with someone who is already angry?

On his way out of the bakery, he turned to me and said "in Spain you have to ask for permission first, before you take someone's photo," and then started to go on about Spanish law and how only he was the owner of the rights to his image and nobody could take his photo without his permission. I politely informed him that he was mistaken, but it was such a surreal moment and immediately I thought of this quote: "If a little knowledge is a dangerous thing, then extensive-but-incomplete knowledge is a constant torment."

And that is the case today, street photography is a constant torment. Despite living in a world where everyone has some kind of camera phone on them at all times and constant surveillance by CCTV systems, people are more paranoid and afraid of photography than ever before. Why? What is it that they have to fear?
Posted by Charlie Mahoney at 12:30 PM

I have experienced a similar situation a couple of times and I am with you with wondering what is wrong.

It seems we live in a society that feeds on psychosis. As people find so beautiful to look at National Geographic magazine or Geo showing exotics cultures, they don't agree to the same in their courtyard. And the result is that we will skip on documenting our modern societies. it would be a shame that we find ourselves without documents of quality for part of our inheritance.

Here's what I wrote in my blog (french) on that topic:

I couldn't agree more with you Marc-André. Thanks for sharing your comments here.