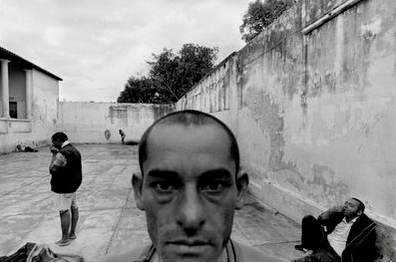 The idea behind starting the Photo Lab Dissections is to get you thinking of the technical decisions made prior to producing a photo, but it is also intended to get you thinking about the aesthetic elements. I chose this image, by Eugene Richards, as the first image in this series because on a technical level it wasn't a difficult photo to take, but on aesthetic level it is complex and layered. One thing to keep in mind is that Eugene Richards completed most of this project without formal access to these mental facilities, so he was often working quickly and trying to attract as little attention as possible, before being escorted away.

So let's get to the technical issues first.

What lens was used (ballpark)?
Daniel left a comment saying that he thought it was a 35mm lens, which I would have been inclined to guess as well, except for two reasons. One, if you look at the man sitting on the ground in the right bottom corner of the image you will see that his head and body appeared to be stretched towards the corner. This type of distortion you don't usually see at 35mm, so I am guessing that Gene used a wider angled lens than a 35mm. Two, I know that historically Gene has used Olympus cameras and has favored a 21mm lens. Now, that's cheating, but cheating in this exercise is irrelevant because what we are really trying to learn is how to look at photos and from this analysis become better shooting photographers. The key to emphasize is that you can often guess what lens was used by looking at the corners. If you see distortion, then a wide-angle lens was used and at this point that's all we need to know. Whether it was a 21mm, a 24mm, a 28mm is not really important as a similar image could have been made with all three lens.

What ISO, aperture and shutter speed?
Just by looking at the photo and the depth of field, we can see that the photo was taken in relatively good light on a cloudy, overcast day. How can we tell all that? One, the sky. Two, there are no harsh shadows on the face in the foreground, nor on the ground below the people in the background. Beyond that, it's difficult to decipher whether Gene was shooting at 100 or 400 ISO or whether he was shooting digitally or with Tri-X film. What's important to know is that he shot at a shutter speed fast enough to freeze movement and at an aperture closed enough to give him plenty of depth of field. My guess is ISO 400, f/8 at 1/250.

Was flash used?
The key to looking for flash use is by looking at the eyes. If you see keylights, which are tiny dot reflections of light, in the subjects eyes you can often identify flash use. You can also identify flash use by looking at the main light source, usually the sun, and if the shadows are well lit, then you know that the photographer has used some fill flash. Considering what we know now, that it was a grey, overcast day with plenty of light, flash was likely not used in this photo.

From what angle was the photo taken?
Both Ed and Daniel nailed this one. The photo was taken above the man in the foreground's head. Whether Gene was standing over this man or was standing on something like a chair is difficult to say. The key here is to recognize that he was slightly above the man in the foreground and was aiming the camera down at an angle.

How might Eugene have measured the light?
There are many ways Eugene might have measured the light. The key to recognize here is that the patio was all cement and all roughly white, which would likely throw off any light meter, just as a snow or beach scene would tend to underexpose the scene. My guess is that whatever method Eugene used to read the light, he would have had to increase the exposure by 1-2 stops or the meter would have been fooled in to producing an underexposed image.

Where was the focus set?
We know from answering the question about ISO, aperture and shutter speed that Gene used a relatively wide depth of field, around f/8. We can clearly see that the man in the foreground is out of focus. The second man, third, forth and fifth men are all relatively speaking in focus. There is a general rule of thumb in photography that says that one-third of the distance in front of the focal point and two-thirds of the distance behind the focal point will stay relatively in focus, so based on this information it is likely that Gene focuses on the third man (from front to back) in order to insure that the man in front of him (the second man) and all the men in the background would stay in focus.

Analysis
To many a beginning photographer, the decision of leaving the first and main subject out of focus would seem to be a mistake, but it's a wonderful technique. Why? Leaving the background elements of the photo in focus, draws the eye of the viewer in to the photograph. If you learn anything from this exercise this is it! Hint! Hint! We want to make complex and interesting photos so when you shoot groups of people with layering...in other words situations where there are people in the foreground, mid-ground and background keep this in mind and set your focus between the mid-ground and the foreground.

The second thing to notice about the layering of this photo is the spacing between each layer. Each man in the scene, whether he is in the foreground or the background is nicely separated by space from the other men in the image. It creates a sense of watching five unique scenes at once and thus adds complexity to the image.

So that's the analysis for the day, layer your photos, deepen your focal point, leave space between the subjects and look for different angles. If you can keep those four things in mind, you're shooting will improve right away. Try to shoot like this yourself and if you want email me the images and I'll post some of the best examples in a future posting. Good luck!
Posted by Charlie Mahoney at 9:19 AM