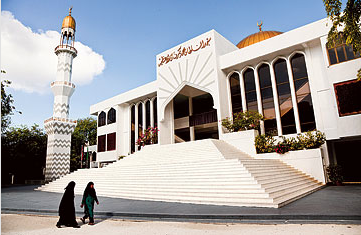 While in the Maldives I was given two assignments by Time Magazine - one, on the the problems the country is facing and the second on a mosque. The shot took a day to prepare as I rode around on the back of a motorcycle looking at all the most aesthetically pleasing mosque in the Maldives. We climbed buildings looking for a clean shot of the various mosques, but there were few good solutions.

In the end I opted to shot the Friday Mosque as it is by far the most grandiose, but again it was a complicated shot as directly across the street was a large wall that surrounded the Department of Defense. The security forces guarding the facility were very strict and I couldn't shoot the building without shooting over the defense facility, so my last and only option was to use my 24mm and get right up against the wall and wait. I shot the building twice. Once in the morning and one right after dusk. In the end Time opted for this photo, which I think was the best choice.
Posted by Charlie Mahoney at 11:47 AM