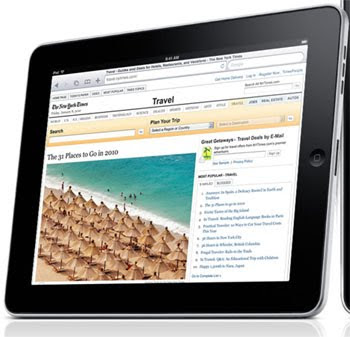 A good sign of the potential of the iPad became clearer today in an article in the New York Times. It seems that advertisers are showing an interest in buying advertising for the Ipad versions of some magazines. Is this a fad or not is still to be determined, but regardless it's a positive sign.

Advertisers Show Interest in iPad
By STEPHANIE CLIFFORD
Advertisers initially approached new media as if they were going duck hunting, tiptoeing cautiously into the waters of mobile phones and the Internet.

With the iPad, it’s big-game season.

Getting ready for the April 3 iPad introduction, FedEx has bought advertising space on the iPad applications from Reuters, The Wall Street Journal and Newsweek. Chase Sapphire, a credit card for the high-end market, has bought out The New York Times’s iPad advertising units for 60 days after the introduction.

Advertisers including Unilever, Toyota Motor, Korean Air and Fidelity have booked space on Time’s iPad application. In a draft press release, The Journal said a subscription to its app would cost $17.99 a month, and the first advertisers included Capital One, Buick, Oracle, iShares and FedEx.

At least initially, it should provide a nice boost for publishers. iPad advertisements on print publishers’ applications cost $75,000 to $300,000 for a few months with some exclusivity, said Phuc Truong, managing director of Mobext U.S., a mobile-marketing unit at Havas Digital.