Be a part of the Solution 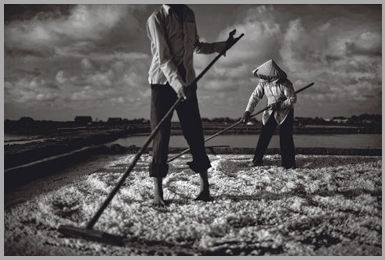 In continuation of the ongoing discussion here of trying to find solutions to today's problems in photojournalism (see prior postings one, two and three), here is a wonderful story of some photojournalists and visual journalists who are getting it right. They have effectively turned the area of working for NGO's on it's head. One group that is featured in the story are my friends at Bombay Flying Club, who helped me produce my multimedia piece, A Trouble Paradise.

You can find the full article here, but here's a teaser.

Because photographers have lined up for years to donate their services, NGOs have come to expect free photography. But some photographers are trying to change that expectation by giving NGOs reasons to pay them,

Phil Borges has built a career and a decent living—from book sales, exhibitions, print sales, speaking engagements and teaching—trading his services to Non Government Organizations (NGOs) in exchange for access to stories he couldn't otherwise get, for logistical and promotional support, and for the satisfaction of making a difference in peoples' lives. It's the calculus of many photographers working without pay for NGOs.

Recently, though, Borges has found himself wondering whether he's doing a disservice to both his profession and the NGOs when he charges too little or nothing at all. The question weighed heavily on him after one particular job for an NGO that was paying him only for some post-production work. He found himself in the field "working my butt off from dawn until dusk," he recounts, and the NGO staff person he was traveling with made him feel like he was a subordinate, or worse.

"And I thought, here I am doing work supporting that employee's salary," he recalls. "It's only human nature. If you're giving your time away, you're not valued as much." He adds, "From now on when I donate my time I will be including my day rate in the contract so they can at least see the value in the contribution I'm making."

Borges is also charging some NGO clients substantial fees. For two recent multimedia projects, for instance, he billed different NGOs $16,500. One project was about burn victims in Sri Lanka for an NGO based in Palo Alto. The charge included $8,000 for the time spent in country shooting, and $8,500 for post-production. Those fees worked out to about $600 per day, which is far less than an NGO would pay for TV production, and nothing near a commercial day rate. But it's better than free, and it's progress for Borges, who confesses, "I'm a very timid negotiator. My wife is the one who should be doing it. I've never had anybody balk at my fee. All of them have just said thank you."
Posted by Charlie Mahoney at 8:49 AM