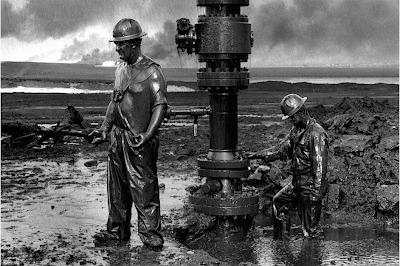 Following my posting yesterday on Salgado and the slide show from The New York Times, I am posting another link of an interview with Salgado from the Guardian. Salgado is such an inspiration, not only because of his outstanding work and dedication to it, but because he made a career change in his late 30's after working as an economist. There's hope for all of us fallen financial types.

I was in Kuwait in 1991. The first Gulf war had just finished, but the oil wells were still burning. To get into the country, I had to go to Saudi Arabia and hire a four-wheel drive the colour of the sand - because that was the colour of the US army vehicles. Then, to cross the border, someone told me to find a card in the same sort of colours as a US army ID card and wave it upside-down. Nobody stopped me, and I got through.

What was incredible inside Kuwait was the sense of being in this huge theatre the size of the planet, with these oil wells burning all around. Sometimes you would go two or three days without any sunlight getting through the vast clouds of black smoke, then suddenly the sky would open. It was also quite dangerous. There were unexploded cluster bombs in the sand. A journalist and a photographer were killed when a slick of oil ignited as they crossed it.

This photograph comes from a series of pictures I made with a group of specialist firefighters from Canada, who were trying to deal with a blazing oil well. Putting out the fire took days and days, but that wasn't the biggest problem, even though they then had to light another smaller fire, so that a lake of oil did not accumulate around them. It was capping the well, for these guys, that was hell. Saddam Hussein's men had used a large number of explosives, leaving the wellhead badly deformed. Because Kuwait is at the lowest point of a vast Middle Eastern oil field, the pressure was enormous, pushing the oil out with a noise like a 747's engines. Everything was completely black. You couldn't hear anyone speak.

It was an incredibly dangerous place to work, because the oil was very light, much like the fuel in cars - so it catches fire very quickly, and its smell is very strong. At one point, one of the Canadians got too close, inhaled too much gas, and fell down unconscious. Meanwhile, as these guys worked away with their tools and instruments, they knew that if they touched metal against metal hard enough to create a spark, a fire would have engulfed them. As I was photographing, we did sometimes have a kind of explosion, as gas burst up through the well, but it did not ignite. The firefighters were making a lot of money, of course, but the work was so tiring and so tough that a few times I saw some of them just sit down and cry.

Working in the middle of all this was extraordinary. One of my lenses got warped by the heat, so I was left with just two: a 35mm and a 60mm. This obliged me to stay very close to these guys the whole time. As a result, I was covered in oil, and felt so involved with the danger, the environment, the strange beauty and the hard work that was happening in front of me. The only way I could keep going was to carry a two-litre tank of petrol and a roll of kitchen paper inside my photo bag. I would put some petrol on the kitchen roll, clean my hands, the lens and the back of the camera, then go in again. Eventually, I felt part of the team, working with them for many days. We all became very close.

I work on stories rather than individual pictures. But for me, this one picture was special: it's an incredible shot of two guys trying to cap a well. They are completely covered in oil and one of them is standing like a statue that has become black over time. It reminds me of those images you see from the first world war, in the grey light of Verdun. The moment I took it,

I knew it would be good. At the same time, I was very afraid. My mouth was dry. That evening, when I got back to my hotel in Kuwait City, I found my jaw was tense and my gums were in pain from gritting my teeth all day long. But I had to be there to take these pictures. I knew I was witnessing powerful, extraordinary things that would not happen again.
Curriculum vitae

Studied: "I am a former economist. I never went to photography school to learn photography."

Inspirations: "Bill Brandt was an incredible photographer. The many different studies he did in England - miners, nudes, life during the second world war - were important to me."

High point: "When I was starting out, when I put aside my career as an economist. I looked at every book, went to every show, did my first stories, developed my first films. A fabulous time."

Pet hate: "Photography has become a small world with so many jealous people. You do a story and then a lot of people try to do the same thing."

* guardian.co.uk © Guardian News and Media Limited 2009
Posted by Charlie Mahoney at 9:12 AM