PDN Responds with a sort of apology... 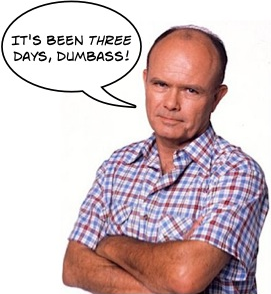 PDN responded to the controversy with this posting yesterday. If you read the comments of Stan Banos and from Duckrabbit in the comments section, they seem to accept PDN's apology. I'm more inclined to believe that PDN followed their PR firm's advice and came up with a typical PR firm like response. It reminds me of politicians who slip-up and say what they really believe...then after much controversy refuse to claim responsibility and apologize half-heartedly. Their words were mis-interpreted. If they happened to have hurt anyone, then, that was not their intention. Blah, blah, blah.

I personally have to side with David Levi Strauss at (Notes on) Politics, Theory & Photography again. Decide for yourself.


The PDN Folks Practice the Bureaucratic Two-Step
Well, the folks at PDN have issued this statement about the color-blindness I noted in my post the day before yesterday. I suppose one might think that is something. And it is. Only it is not at all clear what sort of "thing" it is. Here is the nugget from their mea culpa:

"Yesterday some blogs circulated a note about the fact that of the 24 judges of the 2009 PDN Photo Annual contest, all of them are white. It's a valid point, and one that everyone who works on PDN’s contests has given a lot of thought. While the lack of any judges of color wasn’t intentional, it is regrettable. Thanks to the huge number of entries it draws from around the world, the Photo Annual offers us our best opportunity to see a wide range of work from different perspectives. We should make sure our judges represent a wide range of perspectives as well."

Not bad, huh? Actually, no; this is pretty lame. First, of course, Stan Banos had raised the issue with PDN way before "yesterday." So this generally glacial response conveys a certain, shall we say, lack of enthusiasm for dealing with a pretty amazingly bad judgement.

Second, the passive voice is sooooo useful when you want to deflect responsibility. No one actually did anything! So there is no need for anyone to be responsible. And, of course, there is no need to specify any steps that any specific person ("everyone who works on PDN's contests " hardly is a viable locus of decision-making) might take to avoid similar situations in the future. Eventually the statement gets around to an active sentence (the final one in the paragraph) but by then we readers have been so dulled by ass-covering-bureaucracy-speak that it is hard to notice. And, even there, there is no assignable person who will make sure that the problem is corrected in future years. The statement is signed by Holly Hughes who edits PDN. She doesn't take responsibility. Nor does she identify those who will. She just gives us the royal "we."

"I failed to consider how an all white panel of judges might effect the perception of, to say nothing of the outcomes to, our contests. This oversight is a departure from our past practice. Since I recognize that theses choices have impact on the lives and careers of individuals and on the fortunes of organizations, I regret this failure. In the future I plan to do X, Y, Z to insure that our panels are not simply composed of accomplished individuals but are diverse as well. That will include making sure that there is a specific person on staff here at PDN whose job it is to scrutinize our internal practices."

Unfortunately the remainder of the statement is even less confidence inspiring.

"Past judges of PDN photo contests have included African-Americans, Latinos and Asians who work as photo editors, art directors, web designers and educators. We didn’t choose them out of tokenism. (Yesterday when we were reading the blog comments about this issue, PDN Custom Media Project Manager John Gimenez, who works with the judges during the judging process, noted that he usually doesn’t know the race of the judges until they send him their head shots, and by then the judging is done.) We don’t like to put the same judges through this grueling task too often, and the lack of diversity in the photo community as a whole means that it requires effort to compose a diverse panel year after year. But it is an effort that’s worth making. "

First, I will take the PDN folks at their word. It is great that past panels have been more diverse than the monochromatic one they put together this year. And it is great too (if we can judge by Mr. Gimenez's surname) that they even have something of an ethnically diverse staff. Your subtlety has not been lost Ms. Highes. But, I read this paragraph as an admission that any past diversity was more or less accidental. Even Mr. Gimenez didn't know the composition of the panel he was working with until he saw their head shots! Well, that is wholly beside the point, really. Is Mr. Gimenez responsible in any way for selecting the panels or for identifying in advance rosters of individuals who might be solicited to serve as a judge? If the profession is so bereft of accomplished men and women of color, one would think that whomever put the panels together would have been taking great care to try to insure a diverse group of judges. There is no indication that that has been the case. I have no confidence, based on this statement from PDN that anything will actually change. Do you?
_________
P.S.: In a related matter, yesterday PDN published this interesting interview with Miriam Romais on "Confronting the Photo Industry's Lack of Diversity." In her statement Ms. Hughes explicitly states that "our interview with Romais was not spurred by questions about PDN’s own commitment to diversity. " Of course not. The interview had been in the works for some time. But are we to believe it is wholly conincidental that PDN managed to finally respond to Stan Banos on the very same day that it published the interview? I was born at night, but not last night!

The interview is insightful. It addresses the scope of the difficulty that confronts not only photography but most professions. But it does two things in the current context. First, it allows the PDN folks to divert attention from a quite specific problem - the composition of their panel of judges - by pointing to a broader, undeniably troubling, pattern. Second, given that the interview has been in the works for so long, it makes one wonder why the PDN folks could not look in the mirror and see the specific ways they were contributing to the overall pattern by neglecting diversity in their panel of judges.
Posted by Charlie Mahoney at 9:02 AM

It sounds far too politically correct to believe that there is any truth in it...