Welcome Back David and Tahir! 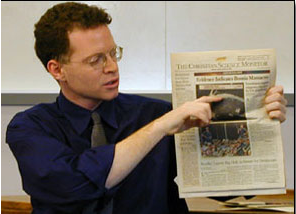 David Rohde, a New York Times Journalist and Tahir Ludin, a local Afghanistan reporter, who were captured by the Taliban in Kabul in November 2008, escaped to freedom yesterday. Rhode's noted investigative work in the Balkans helped expose the Srebrenica Massacre.

David Rohde, a New York Times reporter who was kidnapped by the Taliban, escaped Friday night and made his way to freedom after more than seven months of captivity in the mountains of Afghanistan and Pakistan.

Mr. Rohde, along with a local reporter, Tahir Ludin, and their driver, Asadullah Mangal, was abducted outside Kabul, Afghanistan, on Nov. 10 while he was researching a book.

Mr. Rohde was part of The Times’s reporting team that won a Pulitzer Prize this spring for coverage of Afghanistan and Pakistan last year.

Mr. Rohde told his wife, Kristen Mulvihill, that Mr. Ludin joined him in climbing over the wall of a compound where they were being held in the North Waziristan region of Pakistan. They made their way to a nearby Pakistani Frontier Corps base and on Saturday they were flown to the American military base in Bagram, Afghanistan.

“They just walked over the wall of the compound,” Ms. Mulvihill said.

The driver, Mr. Mangal, did not escape with the other two men. The initial report was that Mr. Rohde was in good health, while Mr. Ludin injured his foot in the escape.

Until now, the kidnapping has been kept quiet by The Times and other media organizations out of concern for the men’s safety.

“From the early days of this ordeal, the prevailing view among David’s family, experts in kidnapping cases, officials of several governments and others we consulted was that going public could increase the danger to David and the other hostages,” said Bill Keller, the executive editor of The Times. “The kidnappers initially said as much. We decided to respect that advice, as we have in other kidnapping cases, and a number of other news organizations that learned of David’s plight have done the same. We are enormously grateful for their support.”

Since the men were abducted, there had been sporadic communication from them and from the kidnappers. Ms. Mulvihill expressed relief at the end of the ordeal and gratitude to the many people — official and unofficial — who offered information, advice and support.

“The family is so grateful to everyone who has helped — The New York Times, the U.S. government, all the others,” Ms. Mulvihill said. “Now we just hope to have a chance to reunite with him in peace.”

“We’ve been married nine months,” she added. “And seven of those, David has been in captivity.”

Both Mr. Keller and Mr. Rohde’s family declined to discuss details of the efforts to free the captives, except to say that no ransom money was paid and no Taliban or other prisoners were released.

“Kidnapping, tragically, is a flourishing industry in much of the world,” Mr. Keller said. “As other victims have told us, discussing your strategy just offers guidance for future kidnappers.”

Mr. Rohde, 41, had traveled to Afghanistan in early November to work on a book about the history of American involvement there when he was invited to interview a Taliban commander in Logar Province outside Kabul. Mr. Rohde, who years before had been taken prisoner while reporting in Bosnia, had instructed The Times’s bureau in Kabul about whom to notify if he did not return. He also indicated that he believed that the interview was important and that he would be all right.

His father, Harvey Rohde, said that while he regretted that his son had made the trip, he understood his motivation, “to get both sides of the story, to have his book honestly portray not just the one side but the other side as well.”

“I guess that personifies my son,” Mr. Rohde said.

As security has deteriorated in Afghanistan, kidnappers have increasingly singled out affluent Afghans as well as foreign contractors, aid workers, church members and journalists. Last fall, Melissa Fung, a reporter for the Canadian Broadcasting Corporation, was held captive in a dank underground hole for nearly a month until Afghan authorities pressured her kidnappers to release her. Mr. Rohde’s captivity was one of the longest in the country.

Mr. Rohde joined The Times 12 years ago after winning a Pulitzer Prize in international reporting in 1996 for documenting the massacre of Bosnian Muslims in Srebrenica.

He is known by colleagues as an intrepid yet unassuming reporter who conducts himself modestly around the office, predictably attired in neatly ironed Oxford shirts and, often, his weathered Boston Red Sox cap. Affable and soft-spoken, he is not one to regale colleagues with war stories, instead saving his storytelling for articles.

“David Rohde is one unbelievably dogged reporter who brings an open mind and big heart to every story,” Mr. Keller said.

Mr. Rohde’s keen interest in Afghanistan was ignited in the intense three months he spent there after the Sept. 11, 2001, attacks, and cemented during his tenure as co-chief of The Times’s South Asia bureau from 2002 to 2005. He continued to travel to Afghanistan after he returned to New York, where he is a member of The Times’s investigations department.

Mr. Ludin, 35, the Afghan reporter who was assisting Mr. Rohde as an interpreter, has worked with The Times of London and other news organizations. A Pashtun originally from Zabul Province, he fled with his family to Quetta, Pakistan, after the Soviet invasion of Afghanistan in 1979. He attended high school there, learning English, before returning to his country and settling in Kabul, where he is now the father of seven children under the age of 8 and the sole breadwinner for an extended family of 17.

Mr. Mangal, 24, who had regularly driven Mr. Ludin, ran a car service with his brother.

Mr. Rohde, who grew up in a tight-knit New England family, majored in history at Brown University. Mr. Rohde’s big opportunity as a reporter came in the mid-1990s, when The Christian Science Monitor sent him to cover the conflict in the Balkans. His tenacious reporting played a crucial role in exposing the ethnic cleansing of Muslims in Bosnia.

Mr. Rohde had been the first Western journalist to travel into Bosnian Serb territory to search for evidence of mass graves. What he found seemed to confirm the suspicions: blood and human feces in a soccer stadium where Muslim prisoners had most likely been shot; bulldozer tracks leading to three rectangles of freshly turned dirt; empty ammunition boxes; and a decomposing human leg. But Mr. Rohde did not think his findings drew sufficient attention to the massacre, said Faye Bowers, his former editor at The Monitor. He decided to venture once more into rebel territory, this time secretly and alone.

“I got a long e-mail saying that he couldn’t live with himself if the massacre went unheeded so he was going back for more evidence,” Ms. Bowers said.

During the trip, he had discovered additional grave sites and photographed piles of clothing and human bones near an earthen dam. But he was detected by a plainclothes watchman and turned over to Bosnian Serb authorities and imprisoned.

It was late November 1995, and Mr. Rohde’s editors joined 11 of his relatives on a trip to Dayton, Ohio, where the Bosnian peace talks were being held, to urge American diplomats to demand his release. After 10 days of imprisonment, during which he was interrogated relentlessly and deprived of sleep, Mr. Rohde was freed. When he arrived in Boston, he was greeted by a phalanx of cameras at the airport, which made him cringe, said his older brother, Lee.

“He’s old school,” Lee Rohde said. “The last thing he ever wants is to be the story. He’s supposed to be the storyteller.”
Posted by Charlie Mahoney at 8:48 AM